The cause of PCOS isn’t well understood, but may involve a combination of genetic and environmental factors. It is also highly likely there’s a family component so you might be more likely to have PCOS if your sister or mother also has it. It is estimated that about 13% of reproductive-age women are currently living with the syndrome. In fact, PCOS is the single highest cause of infertility among women.

Although symptoms vary, some common symptoms of PCOS include: 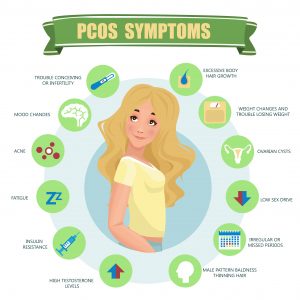 The pathology of the syndrome is primarily hormonal. In women with PCOS, the ovaries produce more androgens (male sex hormones) than normal. Higher levels of androgens make it difficult for the ovaries to develop and release the egg during ovulation, thus leading to infertility. When ovulation cannot occur, progesterone, the hormone involved in the menstrual cycle, is not produced. With the abundance of androgens and lack of progesterone, we see effects of unwanted hair, thinning of existing hair and development of acne. High insulin levels are also commonly found with women who have PCOS.

Diagnosing PCOS can be difficult due to the ranging symptoms between each patient. Typically a doctor will inquire about the patient’s family medical history and history of the menstrual cycle. Hormone and blood sugar tests may be ordered to diagnose or rule out PCOS. An ultrasound of the ovaries may also be ordered to differentiate between different types of ovarian cysts. Because there is not one single test to confirm PCOS, it can be a frustrating process to officially get to a PCOS diagnosis.

In Western medicine, there is no known cure for PCOS although there are ways to reduce and improve the side effects. For women who are not trying to get pregnant, birth control pills are typically prescribed to regulate periods, reduce hair growth and lower androgen levels. A commonly used medication for Diabetes, called Metformin, is also prescribed in order to lower blood glucose, insulin and androgen levels. The medication is prescribed in order to address the side effects of PCOS.

Interestingly enough, Chinese Medicine has been studying and treating PCOS for centuries. The roots of the issue are deficiencies in the kidneys (hormone imbalance) and spleen (menstruation issues). Chinese Medicine has been very effective in treating PCOS through herbal medicine and acupuncture treatments and does so by regulating menstruation, improving fertility and reducing/clearing ovarian cysts.

Typically, women see the best results after three to six months of consistent treatments using both acupuncture and herbal medicine as well as customized lifestyle and nutrition modifications, based on each person’s individual needs.

PCOS is the most prevalent hormonal disorder amongst women of reproductive age. If you have been diagnosed with PCOS or suspect you may have it, call us to consult with you on a treatment plan for a holistic and effective way to regain proper hormonal balance.